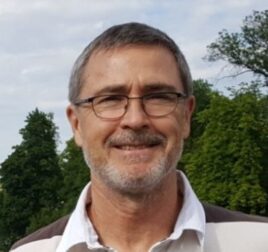 Prof. Dr. Gaspar Perez studies Biology at the Universidad de Valencia, Valencia, Spain (1974-1979), after which he made a PhD in microbiology at the University of Nottingham, Nottingham, UK (1981-1985). During subsequent postdocs at the University of Groningen, Groningen, the Netherlands and the University of Tübingen, Tübingen, Germany, Prof. Perez got more diverse research experience in the field of microbiology and extended his network throughout Europe, allowing him to obtain and execute 5 successful European projects (1992-2004) and 4 projects from the CICYT (Spanish Government). Since 1990, Prof. Perez had focused his research on the fermentative metabolism of Lactic Acid Bacteria in food fermentations and their probiotic activity. New expertise in Molecular methodologies and Genomics of Food Microorganisms allowed the smooth transition to the field of gut microbiota, including the second generation of massive sequencing analysis, still keeping an eye on the biotechnology aspects and trying to identify mechanisms that underlay host/bacteria interactions.

At the laboratory of lactic acid bacteria in the IATA-CSIC has consolidated multiple collaborations with many relevant research groups in the field in Europe, focussing on three main project lines: (i) Bacteria/Host molecular interactions; (ii) Microbiome, Diet and Health; and we do not forget our history (iii) LAB in Food Fermentations.
Prof Perez also participated in different projects with industries, obtained functions in Scientific Advisory Committees of national and international institutions, and in the creation of Spinoff Company (AFT, S.L.) for the production of probiotic fermented vegetable products (EU Patent: Nº 05743929.1).

His personal interests is on understanding the molecular dialogue of beneficial gut bacteria with the host, in particular lactic acid bacteria, their anti-inflammatory and anti-apoptotic activity, focusing on a variety of wall bound bacterial proteinases (PrtP) or cell wall lysines (P40, P75) and extracellular vesicles.